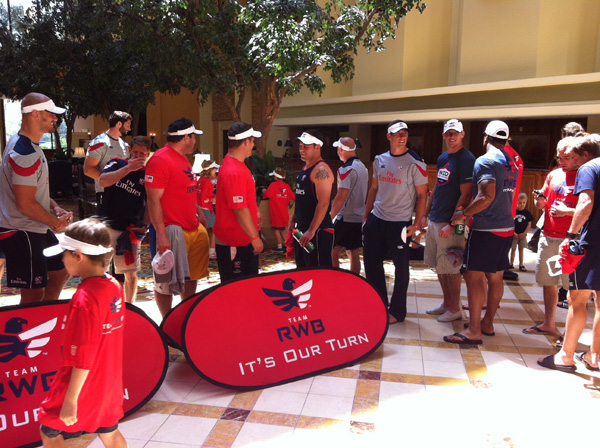 The uniforms of the USA Eagles Rugby team are red, white, and blue, but this past Saturday, June 23, 2012, the entire team got a chance to wear a different set of the American colors. The city of Houston was honored to host the USA Eagles Rugby team in a match against Italy at the newly built BBVA Compass Stadium. While the event was great for bringing awareness to the sport itself here in Texas, another important cause was recognized–Team RWB.

Mike Tolkin, Eagles head coach, and the entire USA rugby team hosted a special “meet and greet” where Team RWB advocates, ULR agents, wounded veterans, and their families had the opportunity to meet players, take photos with them, and talk one-on-one with the team. Chris Widell, Team RWB Woodlands Race Director, brought Team RWB shirts, hats and rubber bracelets for the entire USA team. The coach also recognized veteran’s as “the true heroes” for our country in a moving speech, and expressed his gratitude that he and his team could recognize the heroes through the event with Team RWB. Veterans and their families also were treated to seats at the game later in the day.

The Eagles played well in the first half of the match fighting back from an early deficit to a 10-10 tie. After two red card ejections (that many believe should have been only yellow cards), the Americans fell 10-30 to the Italians. Regardless of the final score, it was an incredible event at the new BBVA Compass Stadium.

Urban Leasing and Realty, sponsors of the annual Team RWB Woodlands 10K event, took part in both events. If you would like to contribute to Team RWB, please visit their site. Also, if you live in the Houston area, please put the 2012 Woodlands 10K race on your calendar, November 10, 2012. More information can be obtained on the Team RWB website or by emailing ULR’s broker, Jessica St. John, Assistant Race Director.