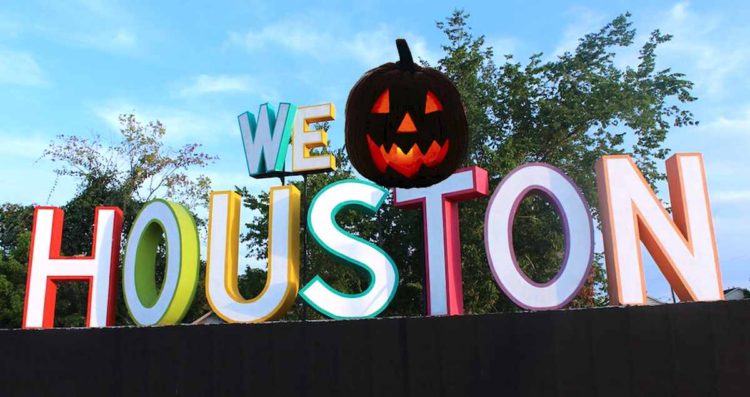 Not sure how to spend this Halloween in Houston? Fortunately, there are plenty of options.

To begin with, be sure to dress appropriately, of course. If you’re not the crafty type, head to Frankel’s Costume Co. in East Downtown, a giant warehouse packed with an enormous selection of costumes and accessories for every occasion. Frankel’s rents costumes as well as selling them, so if you want to try something unusual without making a big investment, consider that an option.

What better way than to get the season started than with an adrenaline rush? You don’t have to wait for the 31st to celebrate Halloween. If you’re looking to get your thrill on, Houston has some excellent haunted attractions. Scream World was named the best haunted house in Houston by both the Houston Chronicle and the Houston Press. Nightmare on the Bayou is located in the Memorial Park area directly beside Houston’s oldest graveyard, and bills itself the only haunted house with real ghosts. Phobia Haunted Houses boasts a collection of four freestanding haunts, so you can hang out with friends and see the attractions at your own pace. The Houston Terror Dome is located in an old apartment building—no strung-together trailers here! While waiting in the (usually short) line, enjoy the festive atmosphere and zombie dancers.

The Houston Scream Fest is much more than a haunted house—they bill themselves as a month-long Halloween festival, which seems about right. Where else in Houston—ok, where else anywhere—can you shoot at walking dead zombies in three different paintball attractions? There are also live concerts every night, freak show performances, carnival games, adult beverages, food vendors, and horror films on the big screen.

For those seeking a less-intense, but arguably more authentic thrill, check out one of Houston’s many ghost tours. Houston Ghost Tour offers a tour downtown of the historic Hermann Park seen through a completely different lens. They also offer several tours in the greater Houston area including Old Town Spring, Tomball, and Humble. Look for their 18+ tours for the most frightening experience. If you prefer your thrills with adult beverages, Paranormal Pub Tours offers walking tours of the Downtown Historic District with stops at two or three bars.

As Halloween falls on a Saturday this year, you won’t have to look very far to find a party. So why settle for just any party? For a grown-up version of trick-or-treating, plan ahead and get your tickets to the Houston Arboretum’s Wicked Woods Party Guests make their way down lantern-lit paths to each of four different food stations. At each station you’ll enjoy a different course of your meal, plus a local beer pairing. You’ll also have your own adult trick-or-treat bag to fill up with goodies from the breweries as you go. At the end you’ll find an open meadow where dessert will be offered, along with games and music.

At the Houston Museum of Natural Science, check out Spirits & Skeletons, where you can celebrate Halloween night throughout the entire museum, drink in hand. Wander through the exhibits as you enjoy live music and your favorite hits played by DJs, marvel at Houston’s own grown-up magician Ben Jackson, and sample from the five local food trucks. You’ve never had this much fun at a museum in your life!

Wishing your canine friend could get in on the action? This year they can, at the Montrose Halloween Pup Crawl sponsored by the Friends of Cherryhurst Park. The Pup Crawl will take place on Halloween from 2-5 p.m., so you’ll still have plenty of time to get ready for the evening. People and dogs of all ages come together for costume contests (human and canine), games, food trucks, local vendors, a DJ, and even a blessing of the pets.

If you’re not wiped out the next day, November 1, check out MECA’s annual Día de los Muertos Festival celebrating the traditional Latin American holiday that honors the lives of family and friends who have passed away. Traditional belief holds that the dead return home to visit loved ones and feast on their favorite foods on the Day of the Dead. MECA’s event features traditional foods, arts and crafts, and a “calavera fashion show,” and is held on the colorful, art-filled campus of Multicultural Education and Counseling Through the Arts.