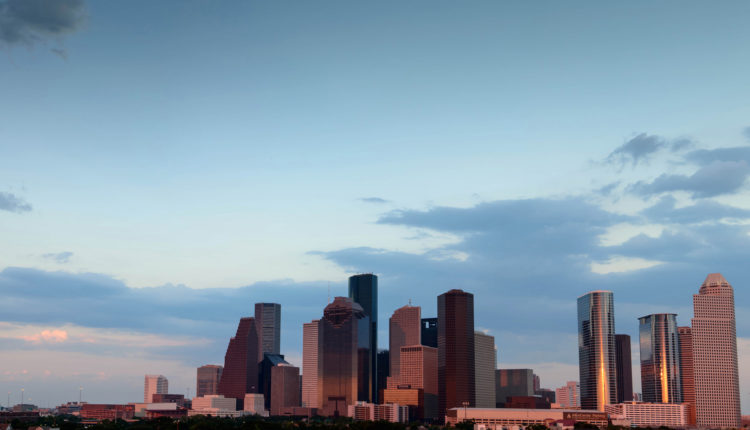 The Houston metro area has a population of nearly 6.5 million and the city itself is well over 2 million. A big reason for the population growth is new jobs. In fact, one of the largest companies in the world, Exxon, is opening an office here that will employ 27,000 new Houstonians. Areas such as Spring, Sharpstown, East Downtown and Southeast Houston are all experiencing major upticks in value and popularity. This trend is only expected to continue over time, as no downturn in the city is in sight.

But for anyone moving to Houston for any reason, there are several very important facts to consider. Some elements of the city completely change the way you live your life on a daily basis. Some are just nice to know about. And some are pivotal to experiencing the full positive potential of the Houston experience.

On that note, here are ten things you need to know about moving to the biggest city in Texas.

#1: It’s HOT and HUMID.
Out-of-towners may immediately notice their glasses fog up upon leaving the airport. The hottest day ever recorded in the city is 109 degrees, and we regularly break 100 degrees “without breaking a sweat.” Now to someone from Arizone, 109 doesn’t sound that hot, and they’re right. Factor in the humidity and you are talking about heat index temperatures well above 130 degrees.

The good news about Houston heat and humidity: Houston rarely gets rained out, and the outdoor weather makes for some awesome events, including Free Press Summer Fest, Lights in the Heights and the irreplaceable Houston Livestock Show and Rodeo. On top of that, there are usually a few rather pleasant weeks in the 70s and 80s in fall, winter and spring. While your friends back in the tri state area have stored their golf clubs for the winter, you will be trying out your new driver in January.

The bad news about Houston heat: AC is a must in car and home. Yet some places blast it in inside, so you may switch between hot and cold. Houston is the only place where you bring a jacket even though it’s 90 degrees out. It’s pretty sticky, with humidity at 90% often, you may have a wet shirt walking to your car.

Leave your fur coat where you currently live. As for a New England Fall or a White Christmas… well, don’t count on it.

#2: It’s prosperous.
Houston is one of the fastest growing cities in the United States, with a GDP growth percentage of more than 35% during the last economic recovery according to The Atlantic. The Houston job market is continually robust, and the city’s property values are stable and above average. If the city were its own national economy, it would be in the top 30 countries in the world.

The good news about Houston prosperity: What’s not to like? While rent and housing prices have gone up over time, prices are still low compared to cities of similar size. Restaurants in Houston have the largest average plate size in the world. Jobs are fairly easy to find, particularly for programmers and anyone in medicine or oil and gas, and there is always entertainment to be found without breaking the bank. Anyone new in town shouldn’t be lost for opportunity.

The bad news about Houston prosperity: There’s bad news? Well, the wave could always end. And the jobs are weighted toward the oil and gas and healthcare professions, so an energy downturn can still impact the city. Still, that money tends to float around and bring down prices as well as raise returns for most people.

#3: The public transit is expanding but limited.
If you want to catch a bus in Houston, leave a time cushion. And if you want to take the rail line, make sure it goes where you need it to go; there is only one rail line in Houston. The rail map is more or less a straight line. Houston is heavily based on its freeway system, which works better than the freeway system in most places but not always as well as the effective public transit of some cities. Bottom line: new residents need a car. 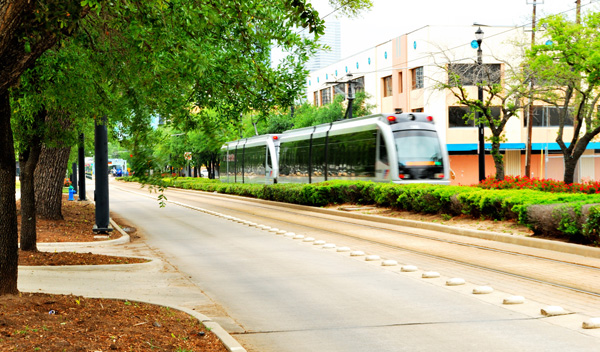 The good news about limited public transit: What transit there is connects to some cool areas. Hermann Park, Mid Main, Downtown, and the Rice areas are all a great way to spend a Saturday. The rail line also offers the opportunity to ride to work from some neighborhoods with good living spaces, such as the Med Center. And Metro, in coordination with the City of Houston, is working on building out the light rail system.

The bad news about limited public transit: Traffic is mounting at an acceptable but noticeable rate. There is also not much in the way of effective transit outside the loop save a few good park-and-rides. While the city is big enough to house some solidly walkable neighborhoods, there is still a relatively small percentage of overall walkable areas.

#4: There’s no zoning.
Houston has an amazing array of building pushed together because commercial and residential buildings are mixed up entirely. It takes some getting used to, but once you are here long enough, you’ll get used to it. Probably.

The good news about lack of zoning: Houston has interesting and eclectic neighborhoods. It’s not unusual to find a music club near residential housing. The lack of zoning also leads to opportunities for business owners who otherwise may not have been able to open certain types of businesses in areas where they will prosper.

The bad news about lack of zoning: Builders can put almost anything by almost anything else. Neighborhoods without HOAs may wind up a strange hybrid that can put certain property values in a hold. But most notably, you may wind up with something you don’t want in your area right nearby.

#5: There’s no income tax.
This is actually Texas as a whole, not just Houston. The lack of income tax makes a big difference in income, especially in a Metropolitan city where the dollar goes farther than practically anywhere else. It’s a stark contrast to people moving to Houston from, say, LA.

The good news about no income tax: Lower taxes means more money immediately in your pocket. This has even served as a selling point for Fortune 500 headquarters and professional athletes to move here, leading to further economic prosperity in an already prosperous city.

The bad news about no income tax: With less income tax comes less social services. Taxes can also show up in other ways, including on your property and sales. Property is still a far better investment here than in other places, but the taxes are worth noting.

#5: Biking can be tough.
Like riding your bike? Houston has several cool bike trails and the lanes are fairly wide downtown, but there are long stretches where riding can be difficult. It’s an interesting place to be on two wheels, to say the least. If are moving from San Francisco where bike lanes are aplenty you will notice Houston takes her sweet time just keeping the car lanes driveable – forget about having designated bike lanes.

The good news about the bike situation: Houston really is making an effort to be bike-friendly. There are new tracks popping up and there is space along the bayou. The city is spending millions of dollars along the Buffalo Bayou improving biking and running trails. Those living in Montrose and the Washington Corridor will be able to walk or ride to the trails in minutes. And for all of the difficulties bikers have in Houston, there actually is a fairly large community. Critical Mass has thousands of riders on a monthly basis. 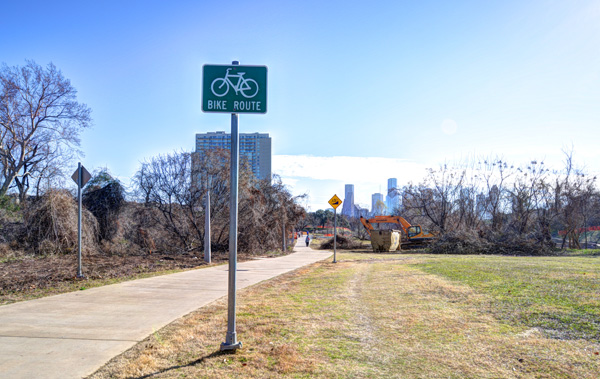 The bad news about the bike situation: The city was not built originally for bikers or pedestrians; you can’t see around corners in your car without pulling into the cross-walk. Several bikers have died in the past .

#6: The shopping is to AHHHHH-mazing.
Houston has several very impressive stretches of shops and malls, the largest of which is The Galleria (www.galleriahouston.com) at the corner of Westheimer and the 610 Loop. Rice Village , the River Oaks Shopping Center and the lower end of Westheimer also provide great opportunities to find deals on clothes and other accessories.

The good news about the shopping: Name your style and the city will deliver it. Houston is the most cosmopolitan city in the country and its styles are as eclectic as its makeup. You can spend as many days as you want shopping ‘til you drop and never run out of places to go.

The bad news about the shopping: There’s no shortage of ways to run out of money. And the Galleria may not be easy to get to at some peak shopping hours, so check traffic before heading there.

#7: Restaurants are plentiful.
Are you moving here for the food? You’ve come to the right place! Houston has any kind of food, from Mediterranean to Indian, Greek, Sushi, Tacos… and BBQ, of course. You can find almost any kind o restaurant you want at a reasonable price. 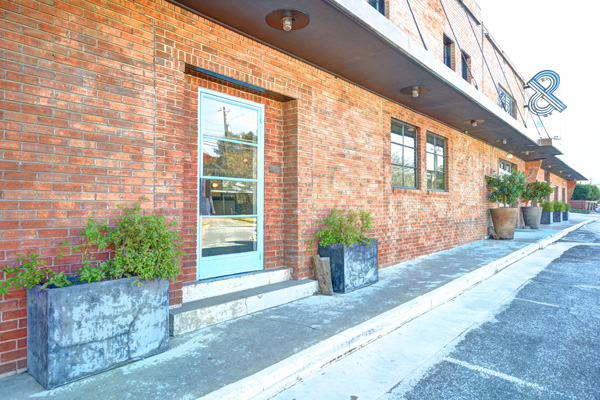 The good news about the restaurant scene: It’s food mecca! Healthy or not, cheap plates, plenty of options, easy to get to a good place to eat, plenty of delivery… we serve food the way you want it!

The bad news about the restaurant scene: There are more restaurants than gyms. It’s a bit asymmetrical, to say the least.

#8: Everyone owns a car.
90% of Houston residents own cars. By contrast, only 10% of New York City residents own cars. Our aforementioned freeway system is something for new residents to get used to. And if you aren’t used to having a car, then Houston will change that fast.

The good news about cars: When your city is based on the automobile, you build it FOR the automobile. Houston boasts plenty of highway accessibility and gas stations. New residents will love how the feeder roads allow you to hop easily on and off the highways.

The bad news about cars: Public transit is rarely an option. Traffic is significant. And there are certainly days when Houston drivers are less than cheerful.

#9: Energy is deregulated.
In some places, the only energy company is the one sponsored by the city or state you live in. Not in Houston. Due to energy deregulation, Houston residents have as many options as they want, and are able to take advantage of competitive rates, service and rewards.

The good news about energy regulation: Pick the energy option that is right for you.

The bad news about energy regulation: Watch your provider closely. Make sure to pick one with a good price and good service. Consider finding a personalized rep. Most importantly, visit www.powertochoose.com to make sure you are getting the best possible rate.

For new residents coming in from states with equally loose gun laws, that may not be a big deal. If you are moving to Houston from Washington, DC, though…

The good news about Texas gun laws: You can carry a gun if you choose.

The bad news about Texas gun laws: Other people can, too.

Now that you have a little knowledge about what Houston is like, why not get a fuller picture by zeroing in on a few specific areas with these helpful articles:

And if you are moving to town and just want someone to show you around, contact ULR today!