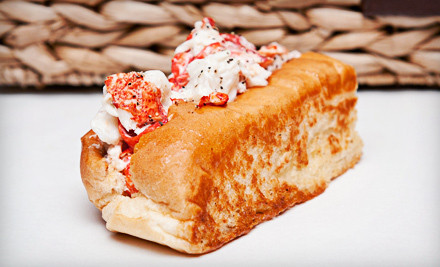 When ULR found out about Maine-ly Sandwiches, we knew we had to spread the word (if all the Houston foodies out there haven’t already). The family who owns the restaurant is originally from Portland, Maine, and Houstonians love what the family has brought to the community with their Maine-inspired style sandwiches.

The nautical themed restaurant is a popular lunch destination, and has definitely made its mark on the city’s dining scene. The smell of fresh bread hits you when you walk in the door, and you’re greeted by friendly counter service, but also by employees who actually care about customer service. Not to mention, we’ve yet to meet someone who can resist their famous lobster roll sandwich filled with fresh lobster imported straight from Maine.

Owner of the family-run restaurant, Buddy Charity, opened the first location in Greenspoint just one short year ago, but has already gained respect from the Houston community. Needless to say, it was by popular demand that convinced Buddy to open another restaurant more centrally located in town. It’s only been open less than 3 months, and already the new location off Shepherd is causing commotion among Upper Kirby and Montrose residents.

ULR got to chat with Buddy’s talented daughter, Holly, who is the manager AND baker for Maine-ly Sandwiches (which is where those awesome whoopie pies come from). We were excited to get the scoop on the family’s restaurant, the acclaimed lobster roll, and how the business turned into such a success. Tell us about Maine-ly Sandwiches and how it got started.

It was my dad’s dream. It actually started out as an Italian sandwich shop with lobster rolls on Friday but people continued to ask for the lobster rolls so it turned into an everyday thing.

Why did your dad, Buddy, choose Houston as the location to open his restaurant?

Well, my family moved here 12 years ago because my parents were teachers at the time and there were good teaching positions available.

Give us the scoop on the popular ‘lobster roll’ sandwich.

It consists of lobster mixed with mayonnaise topped with pepper on a butter-toasted bun. It is definitely something you can’t get anywhere else around Houston. Our lobster roll is nice and simple and true to its name. And the lobster is imported from Portland, Maine. What’s the fan favorite as far as the Italian sandwiches go?

The Italian meatball is one of the most popular.

How did you come up with the idea to bring whoopee pies in the mix?

My dad grew up with whoopie pies so I looked up a bunch of different recipes and picked the things that I liked about them but he had the final say in them as far as the original whoopie pie. The other one’s I created off my cravings and what I thought would taste good. How has the community responded to your restaurant?

Maine-ly Sandwiches has been such a success, what advice do you have for others on how to run a successful restaurant?

Good management, good employees, knowing the business inside and out, and working 24/7. When you have your own business, you have a passion associated with it.

Do you plan on opening more locations around Houston or other surrounding cities?

We see another restaurant or two in the future. I also hope to expand the whoopie pie part as far as birthdays and events. Why is this restaurant so different from others in the Houston area?

It’s just something different. A lot of people in Houston have never had a lobster roll. It is just sort of a fun dish and more of a newer adventure for Houstonians, and a lot of people don’t know what a real homemade Italian sandwich is like so we can give them a taste of that. We did modify the sandwiches for the Houston taste buds. However, if customers want a true made Italian sandwich, we can modify it for them.

ULR would like to give a big thanks to Holly and everyone at Maine-ly Sandwiches.