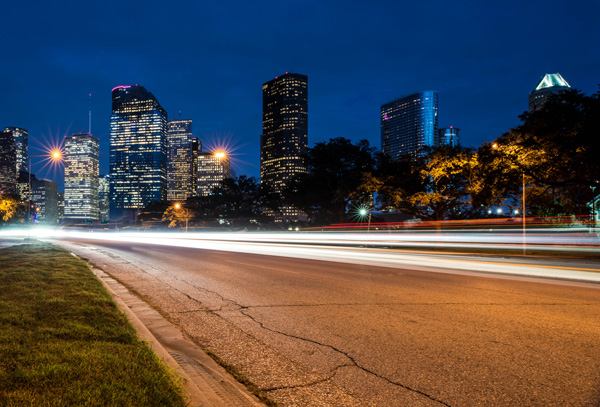 With 2014 in the rearview and 2015 ahead, it’s a great time to take a look at how real estate performed and attempt to make some predictions on the best Houston neighborhoods for price appreciation in the year ahead. The Houston metropolitan statistical area (MSA) median price for a home appreciated around 6.5% and housing inventory stayed near the anemic 2013 levels. However, the overall market statistics don’t tell the whole story. When it comes to real estate in the Houston inner loop, price appreciation is more accelerated and houses sit on the market fewer days than the broader market. Many of the usual suspects are performing well, but this year a new neighborhood has charged into the fray showing massive price appreciation and clearly outperforming the others.

My main goal is to synthesize the retail single family home and condo sales data so that potential home owners or investors can use it to make decisions about where to buy in Houston’s inner loop. (Though, I caution anyone that past performance does not necessarily correlate with future performance). One of the challenges on the analysis was choosing how much neighborhood detail I needed. I did my best to choose neighborhood boundaries that were widely accepted and that made sense based off the city’s geography. I chose to compare the 4th calendar quarter of 2013 with the 4th calendar quarter of 2014 have the most recent quarter’s complete sales data. I decided to use median price appreciation, median price per square foot appreciation, and change in median days on the market.

What Inner Loop Neighborhoods Appreciated the most? 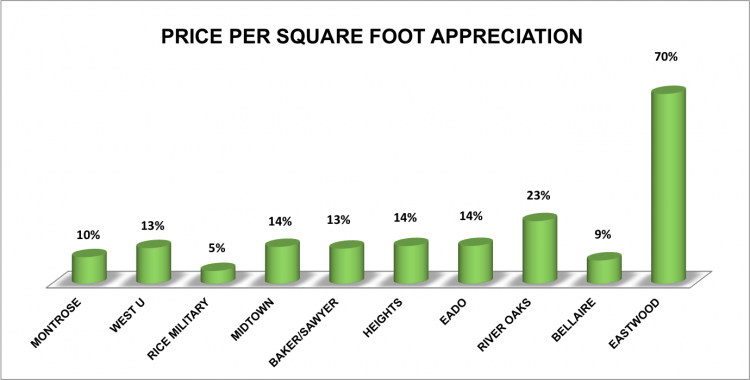 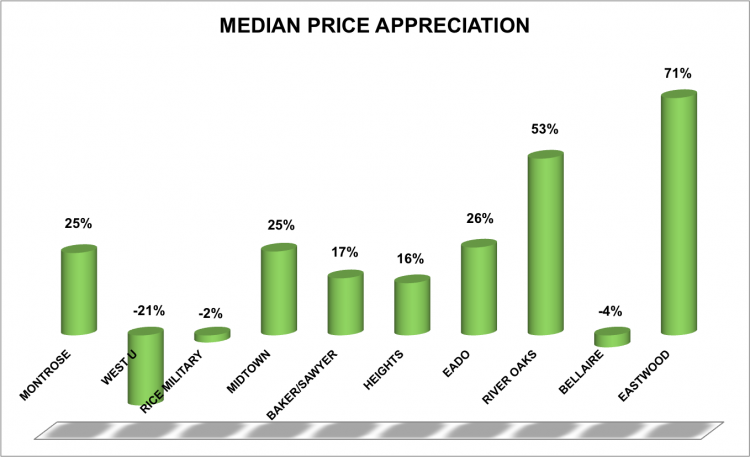 Looking at both metrics of home price appreciation and price per square foot appreciation the clear winner is the Greater Eastwood neighborhood. The Eastwood neighborhood is just east of EADO. The area is characterized by charming brick bungalows that have obviously begun charming many buyers. When you combine the architectural charm (akin to many Heights and Montrose bungalows) and the incredibly low median price point (in comparison to the other inner loop contenders) of just over $200,000 you have a formula for serious demand as the price appreciation shows. Another stand out is River Oaks. One of Houston’s elite neighborhoods continues to see prices move into the stratosphere with median home prices moving from $1.6 million to $2.5 million. The median price change out-paced the median price per square foot change which suggests that both existing homes and land are getting more expensive while houses in the area being built larger or remodeled larger. This is in contrast with the Bellaire and West University neighborhoods where price appreciation was actually negative but the price per square foot was positive. The data suggests that there could be a trend towards smaller houses or townhomes in those neighborhoods. Other notably strong performers were EADO, Midtown, and Montrose, showing strong appreciation in both metrics. Of note, the Montrose neighborhood’s median price of $589,000 is closing ground on Bellaire’s $699,000. While all inner loop neighborhoods are witnessing a surge in construction, EADO, Midtown, and Montrose are home to a broader mix of infil projects: single family houses, townhomes, and multifamily options.

How long do homes sit on the market inside the loop?

The big outlier for days on the market is River Oaks. There are also far fewer transactions in the River Oaks area. It’s safe to say that the ultra high end of the market isn’t as liquid as the rest (fewer homes and fewer potential buyers). However, overall, the number of days a home sits on the market is far below historical norms. In neighborhoods like West University, Bellaire, and Eastwood there is no hemming and hawing on your purchase. Similar to the last couple of years, houses are commonly under contract in their first week on the market. Eastwood shows the largest negative delta in days on market, which can indicate an increase in demand (also reflected in price appreciation).

What will be the best Houston Neighborhoods inside the loop in 2015?

Well, obviously the charts show that the Eastwood neighborhood is on fire right now. I believe it will continue to see growth as long as the petrochemical boom on the east side continues. For those looking at a higher price point, the urban core neighborhoods of Montrose, Midtown, and EADO should perform well. The data shows that there is opportunity at all price points, as well. Looking into 2015, the elephant in the room for Houston’s economy is the price of oil. If WTI stays in the $40 price range for a protracted period, Houston will see some high-paying jobs disappear. On the other hand, the petrochemical boom on the east side of Houston will bring thousands of jobs and the medical center continues to grow. The national economy is chugging along while Europe and China’s economies are having their issues. Despite the potential energy industry setbacks, Houston will grow in 2015. The trend towards urbanization and walkable housing will also continue. As a result, I believe the inner loop neighborhoods in Houston will experience modest price appreciation as the housing market continues to move closer to equilibrium.