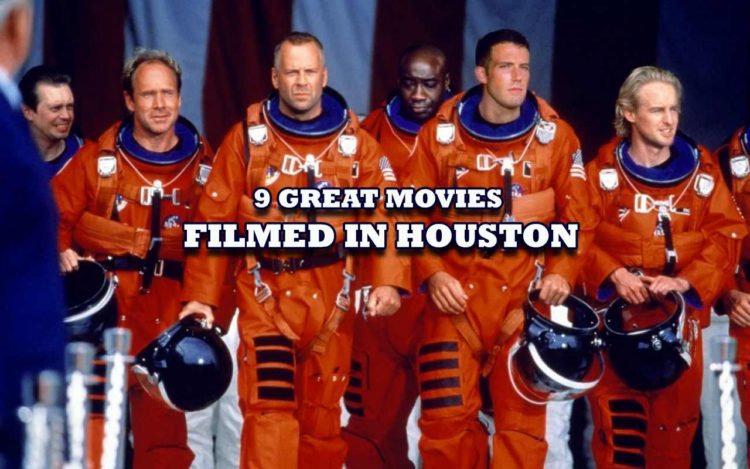 When it comes to the film industry, Houston may not be the first location people have in mind. However, Texas is a popular choice for filmmakers because of generous incentives by the state, and Houston is one of the top cities thanks to its varied landscape. Filmmakers love the cosmopolitan backdrop of Houston’s Downtown, the Historic District’s Southern charm, the many beautiful parks, and NASA’s famed Johnson Space Center (a must for any space-exploration film). And of course, Houston is the setting for many stories, whether or not they were filmed on location. Below are some of the most popular movies filmed or set in the city, but it’s far from an exhaustive list.

The Martian (2015) – This #1 box office hit was filmed across the globe, but the single establishing shot was filmed at the Johnson Space Center. The story focuses on an astronaut left behind on Mars who must find a way to survive on the hostile planet.

Boyhood (2014) – This coming-of-age drama follows the life of a Texas boy from the age of six to eighteen and across various settings in the state, including Houston. The film is remarkable because instead of using multiple actors to portray the character at various ages, the filmmaker chose to use a single actor and film him at different times from 2002 to 2014.

Houston (2013) – Featured at the Sundance Film Festival, this movie was set and shot in the city. The story features a corporate headhunter from Germany who travels to the city seeking an oil company CEO as he descends into his own personal darkness.

The Tree of Life (2011) – This experimental drama film received critical acclaim and was nominated for three Academy Awards for Best Picture, Best Director, and Best Cinematography, and won the Palme d’Or at the Cannes Film Festival. It explores the origins and meaning of life using a middle-aged man’s memories of his childhood in 1950s Texas, as well as visuals of the origins of the universe and life on Earth. The main story is set in Waco but it was filmed at several Texas locations, including Houston.

Friday Night Lights (2004) – This famous sports movie based on H.G. Bissenger’s book tells the inspiring story of the Permian High Panthers, the beloved high school football team of the Texas town of Odessa, and their journey to the state championship. In the movie, the championship game was filmed and played in Houston’s massive Astrodome, although in real life it was played at the University of Texas at Austin’s Memorial Stadium.

Pearl Harbor (2001) – This movie follows the lives of two Army Air Corps pilots and a Navy nurse throughout World War II. Part of the movie was filmed aboard the U.S.S. Texas, one of only six battleships to have served in both World Wars. This setting is noteworthy because the ship is now permanently stationed at the San Jacinto Battlefield as a floating museum ship, accessible to visitors.

Space Cowboys (2000) – It’s an old-fashioned Clint Eastwood cowboy movie, but in space, featuring four aging ex-test pilots who return to space to repair an old Soviet satellite. It might sound cheesy, but critical reception was generally positive. Part of the movie was filmed at NASA’s Johnson Space Center (because obviously).

Armageddon (1998) – This science fiction disaster thriller film (yes, that’s a genre) was the worldwide highest grossing film of 1998, despite mixed reviews. The storyline follows a group of rough-around-the-edges deep core oil drillers recruited by NASA to save the planet from a giant asteroid. Perhaps its success lay in the fact that it didn’t take itself too seriously. Several scenes were filmed at the Johnson Space Center (perhaps you’re beginning to notice a pattern here) and Houston’s Ellington Airport.

Apollo 13 (1995) – This historical docudrama is one of two #1 box office hits partially set in NASA’s Johnson Space Center, along with The Martian. However, in Apollo 13, the NASA headquarters in Houston takes center stage as one of two major settings throughout the movie (the other being the Apollo 13 spacecraft). From the Space Center, NASA’s flight controllers work tirelessly to get three astronauts back to earth after an accident leaves their spacecraft severely damaged. The film is notable for the realistic portrayal of NASA’s space program.