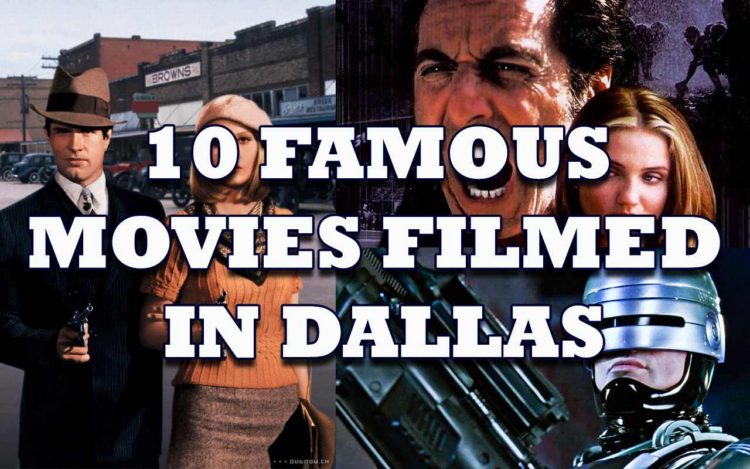 While Dallas is well known for its strong, diverse economy, many people may not be aware it has a vibrant film industry spanning over 60 years and still going strong. Dallas is a favorite filming location due to its mix of modern urban development with close-by picturesque natural and rural locations. Below are some classic films shot over the last 50 years.

This true-life crime drama, directed by Arthur Penn, was filmed across the Dallas region, including Red Oak, Ponder, and Waxahachie. Set during it Great Depression, it follows the violent crime spree by legendary bank robbers Clyde Barrow (Warren Beatty) and Bonnie Parker (Faye Dunaway). Despite the fact that the movie is nearly fifty years old, it remains relevant as a film industry classic, a landmark turning point in its depiction of an unprecedented level of open sex and graphic violence. It was one of the first 100 films selected for preservation in the United States National Film Registry.

Although many Dallas movies include famous landmarks or familiar scenery, others were shot primarily at one of the city’s several movie studios. This is the case for Silkwood, a whistleblower drama that portrays the story of Karen Silkwood (Meryl Streep), a labor union activist who died under suspicious circumstances after she challenged the dangerous practices of her employer, the Kerr-McGee plutonium plant. The movie was shot at the historic Studios at Las Colinas.

While this classic cyberpunk film is set in 2028 Detroit, many scenes were filmed in Dallas due to the more futuristic appearance of the city’s landscape. Specific buildings shown include Reunion tower and Dallas City Hall. The movie focuses on police officer Alex Murphy, who is murdered by a brutal street gang but revived by the corrupt corporation OmniCorp as a cyborg law enforcer. What they don’t anticipate is that a part of Alex lives on inside the machine, intent on the pursuit of justice.

In this critically acclaimed war drama directed by Oliver Stone, most of the scenes filmed in the United States were shot in Dallas. (Much of the story takes place in Vietnam, and these scenes were filmed in the Philippines.) Recognizable shots include a parade on Jefferson Boulevard in Oak Cliff and Tom Cruise’s fistfight in Milo Butterfinger’s bar on SMU Boulevard. The film tells the true story of Marine Ron Kovic (Tom Cruise), following his traumatic war experience, recovery, and conversion to an outspoken anti-war activist.

Many of the scenes in this historical conspiracy-thriller from director Oliver Stone were filmed in and around Dallas. The film revisits the assassination of President John F. Kennedy and surrounding conspiracy theories through the eyes of a district attorney, Jim Garrison (Kevin Costner), as he investigates a possible cover-up. Although many scenes were shot in and around Dallas, by far the most interesting are those filmed at the actual Dealy Plaza (where Kennedy was actually shot) and the Texas School Book Depository (where Lee Harvey Oswald hid as he shot the president).

With the upcoming television revival of The X-Files, the groundbreaking 90s cult classic TV show, The X-Files: Fight the Future definitely bears mentioning. When we first see FBI agents Fox Mulder (David Duchovny) and Dana Scully (Gillian Andersen), they are responding to the bombing of a federal building, set and filmed in Downtown Dallas. If you’re planning to binge-watch the series (highly recommended!) on Netflix before the series airs, make sure you catch this movie, too.

Texas Stadium made an important appearance in this famous football movie directed by Oliver Stone (who clearly enjoys filming in Dallas). The movie follows the lives of the people involved in a fictional football team—players, coaches, owners, and their families. The stellar ensemble cast includes Al Pacino, Cameron Diaz, and Dennis Quaid. While the stadium was demolished in 2010, football fans will enjoy the nostalgic tribute to the former home of the Dallas Cowboys.

Although this classic independent film, directed by Kimberly Pierce, was released 16 years ago, it is newly relevant today thanks to a rising awareness of transgender issues. It tells the true story of Brandon Teena (Hillary Swank), a young trans man who was beaten, raped and murdered by his male friends after they discovered he was transgender. Although the events took place in Nebraska, due to budget constraints most filming took place in Dallas and the surrounding area.

Another famous Dallas sports landmark makes an appearance in this beloved sports drama directed by John Lee Hancock—the Globe Life Park, home of the Texas Rangers. It is based on the heartwarming true story of Jim Morris (Dennis Quaid), a high school baseball coach who agrees to try out for the major leagues if his team makes the playoffs.

Native Texan Terrance Malick shot The Tree of Life in his home state, including some scenes in Dallas. Alert viewers will catch a quick glimpse of the stained-glass spire at the Thanks-Giving Square Chapel in Downtown. This experimental drama was ranked one of the 10 greatest films of all time by Roger Ebert. Starring Brad Pitt, Sean Penn, and Jessica Chastain, the film explores the origins and meaning of life as a middle-aged man revisits his childhood growing up in 1950s Texas.